Spring Comes, And The Grass Grows By Itself (Zenrin)
or What Zen Has Taught: You want sound bites? Ok... Zennovation and Zero-Point Mind
There, I've coined 2 new terms...use them if you like, as long as you credit or "#mention" me. MU-Peter :)

While I know no-thing of Zen… True, I often point to this kind of connection in my blog, yet I feel have to post a response to this article on : What-zen-has-taught-silicon-valley-and-steve-jobs-about-innovation

“Which raises a question that may seem crude, aggressively Western, and not at all Zen: Can the rest of us boost our innovation mojo by applying some of these centuries-old principles to modern-day challenges?” (from the article)

Ok, so you knew this would get my attention.


I am uncomfortable with the idea of vulgarizing Zen, with the idea that it is merely a technique for attaining something, a competitive advantage over your rivals. Especially when it is something material or motivated by ill-advised desires. And if your aim is spiritual... the desire for it may drive away the very thing you seek.

"You cannot be spiritual while you are in your own desires. So stop desiring to be spiritual."
Rabbi Rami

Perhaps, Marshall McLuhan (if the media is the message and the content is the audience) spoke in metaphors because the digital age is in really an analogue to reality. Want to paint a masterpiece, make yourself a perfect human being...then paint naturally.

"In both life and art the cultures of the Far East appreciate nothing more highly than spontaneity (tzu-jan).
This is the unmistakable tone of sincerity marking the action which is not studied and contrived. For a man rings like a cracked bell when he thinks and acts with a split mind - one part standing aside to interfere with the other, to control, to condemn, or to admire. But the mind, or true nature, of man cannot actually be split... To make an end of the illusion, the mind must stop trying to act upon itself, upon the stream of experiences, from the standpoint of the idea of itself which we call the ego."
Alan Watts

“At one stroke I forgot all my knowledge!
There’s no use for artificial discipline,
For, move as I will, I manifest the ancient Way.”
(Hsiang-yen)


When a monk asked Bankei what he thought of disciplining oneself to attain satori, the master said, “Satori stands in contrast to confusion. Since each person is the substance of Buddha, (in reality) there is not one point of confusion. What, then, is one going to achieve by satori?"
&
"You are primarily Buddhas; you are not going to be Buddhas for the first time. there is not an iota of a thing to be called error in your inborn mind...If you have the least desire to be better than you actually are, if you hurry up to the slightest degree in search of something, you are already going against the Unborn."
(Bankei Kokushi Seppo)

My experience in “pointing to the moon” has been that often people will just stare at your finger. I mention that at the end of my second blog post in Jan. "Rude Awakening". You can lead a horse to water but can’t make him drink. No amount of sitting zazen will bring enlightenment. Polishing a tile will not transform it into a mirror. (Matsu)

The opening words of the oldest Zen poem say that


“The perfect Way (Tao) is without difficulty,
Save that it avoids picking and choosing,
Only when you stop liking and disliking
Will all be clearly understood.
A split hair’s difference,
And heaven and earth are set apart!
If you want to get the plain truth,
Be not concerned with right and wrong,
The conflict between right and wrong
Is the sickness of the mind.”
(Seng-ts’an in the Hsin-hsin Ming.)

While I do believe there is a correlation of Zen mind and innovation… It is easier to say what Zen is not, than what it is. Paradoxically, and most confusing to the rationalists and those "classically trained", Zen is more about letting go of something and gaining no-thing.


"Men are afraid to forget their own minds, fearing to fall through the void with nothing on to which they can cling. They do not know that the void is not really the void but the realm of the Dharma...It cannot be looked for or sought, comprehended by wisdom or knowledge, explained in words, contacted materially
or reached by meritorious achievement."
(Huang-po in the Chu Ch'an)

It can mean many things, in research and statistics it is the population parameter like sigma, an expedient but only an estimate of, not the reality.In neuroscience, the brain has what are called receptors by this name and so on, MU is a multifunction word from many contexts. Many things...

In Japanese MU means "not nothing" but rather "no-thing". 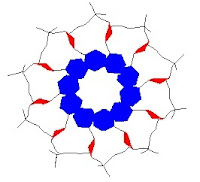 The dialogue between East and West is not easy to translate.
Zen is a state of mind whether you are sitting lotus, washing the dishes or any ordinary activity.

"You can't think sloppy 6 days of the week and expect to be sharp on the 7th."
(Paraphrasing R. Pirsig in ZAMM)

But I also believe it is Integral and does not lend itself so easily to patchwork or half-hearted and half-understood or half-done. Do, there is no try. (yes, a nod to Yoda). One does not know Kung-fu or Tai Chi simply by knowing technique without the moral and spiritual aspects that go with it. Art technique may be learned without the natural human feeling it is not a masterpiece.


Zen is a Way of Life, not necessarily a self-help book, new age fad or trendy gadget you can apply piecemeal. Yes I know that's Disruptive in this age of  Digital Darwinism

"Without looking forward to tomorrow every moment, you must think only of this day and this hour. Because tomorrow is difficult and unfixed and difficult to know, you must think of following the Buddhist way while you live today... You must concentrate on Zen practice without wasting time, thinking that there is only this day and this hour. After that it becomes truly easy. you must forget about the good and bad of your nature, the strength or weakness of your power."
(Dogen - in the Shobogenzo)

The taste of tea is the taste of Zen (old Japanese saying A word of caution as an epilogue. Like Martial Arts, Zen is not meant to be approached lightly. When drinking your tea, sip and savor it lingeringly. Don't gulp it, least you miss the flavor and maybe even burn yourself. Final words…before this whole thing starts "Stinking of Zen"


"You must empty your cup."
(Jackie Chan - Forbidden Kingdom)


"Like the empty sky it has no boundries,
Yet it is right in this place, ever profound and clear.
When you seek to know it, you cannot see it.
You cannot take hold of it,
But you cannot lose it.
In not being able to get it, you get it.
When you are silent, it speaks.
When you speak, it is silent.
The great gate is wide open to bestow alms,
And no crowd is blocking the way."
(Cheng-tao Ke)


The Zen Doctrine of No Mind by D.T. Suzuki
or
The Dancing Wu Li Masters by Gary Zubov
or
Zen and the Art of Motorcycle Maintenance by Robert Pirsig
Ok that's enough for now.


Look at the moon, not the finger