or Don't Give Up
We are responsible for this and we must change our ways if we truly love life.

The U.N.'s IPCC report is finally out and the news about climate change is grim... with a silver lining.

Honestly. There's no denying it now unless it is by willful ignorance or malice. Some climate deniers and skeptics still point to a slowdown in warming as proof of a long term trend. The truth is, this is at best a hiatus. It reflects expected random climate fluctuations and the fact that 1998 was picked as a starting point for recording the temperatures. It turns out 1998 was a particularly hot year, thus setting things high to begin with.  Heat is also being temporarily stored in the oceans and rising ocean temperatures bear witness to this process. One of the consequences is that the heat will eventually be released in one way or another. This last ditch argument by deniers doesn't change the clear upward progression over a longer period of time.

The pathology of denial will not change the resulting data or the facts of solid science. Denial won't be averting the greater disasters of tomorrow, either. Our children's children will suffer in a changed world. A world we changed... and did nothing about. Shamefully the greed of some has tricked many into complacency or idiocy.  Denial is also not thinking of future generations. WHETHER OR NOT YOU BELIEVE THE SCIENCE. If all the non-sustainable resources (like carbon fuels) are used up today, none is left for those of tomorrow. Except the pollution and mess we leave behind to them as a dirty legacy. With an exponentially growing population, increasingly consuming resources these things don't change whether you believe that climate change is happening or not, WE CANNOT CONTINUE ON THE SAME COURSE.  There are many things we need to change to "green" anyway. The conclusion is the same, not doing anything will be a threat to our survival. WE MUST ACT NOW! If I'm shouting its because some seem deaf to the facts. 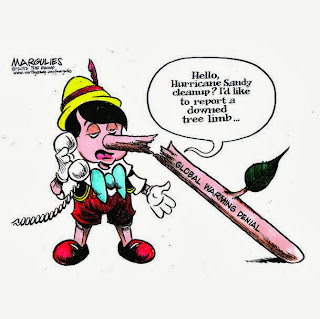 And yet...The un-deniable truth is the entire planet is warming and we are doing it. Over the course of this century, global warming will continue. If we don't change course, the consequences will be that weather extremes will be more severe, the poles and glaciers will melt, the sea level will rise and living conditions will get worse. Plants and animals will suffer and die, people will suffer and die. I know. It's not a pretty picture. But putting your head in the sand won't help. What will it take for humanity to see through the big oil lobbyists' almost psychopathic greed and pay attention to the scientific facts that have been presented for decades. You don't need to burn to avoid fire. Today, climate change is a fact. How will you act?

However, here's the silver lining...

There is a 95 percent likelihood that human activity is the cause. Why is this a silver lining? Well, it means that we can do something about our attitudes and activity and mitigate the coming disaster. But this can only be done as long as we (humanity, the world) face the stark facts before us all. The truth is we must save ourselves from ourselves. Further consequences to this are that planetary biodiversity, animal and plant abundance and distribution will all change drastically. Displacement and disruption will affect all ecosystems across the globe, including human habitation, economy, agriculture, health and much more.

We are accelerating mass extinctions.
Eventually, it could be our own.
But we can do something about it.

The changes are already underway and will last for centuries to come.
Some of the damage is unavoidable now, but not all.